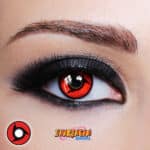 Naka was at least skilled with kenjutsu, considering he had a sword. He was able to awaken his clan’s dōjutsu kekkei genkai: the Sharingan. The dōjutsu granted him the ability to use the technique Izanagi, which he apparently used obsessively with such skills that he could survive combat against several other Uchiha. He was also able to activate the Mangekyō Sharingan, which took the form of a red, three-point pinwheel with his pupil being prominent in the centre.

There are no reviews yet.